Again, another contradiction from Tawhidi. So were we free-thinkers and innovators in science, or were we thieves? Make up your mind, Tawhidi, don’t just go with where your brain farts.

Tawhidi tries to trick the world by saying he was always a recognized Imam previously before he ‘reformed’ and became a peace-preacher:

These statements and pictures are filled with lies and deception. Firstly, here is a video done by the ‘Tawhidi Exposed’ facebook page:

Secondly, we know that Tawhidi lies about what he was doing at those places, and what he preached about. Here is an example of what Tawhidi lied about: 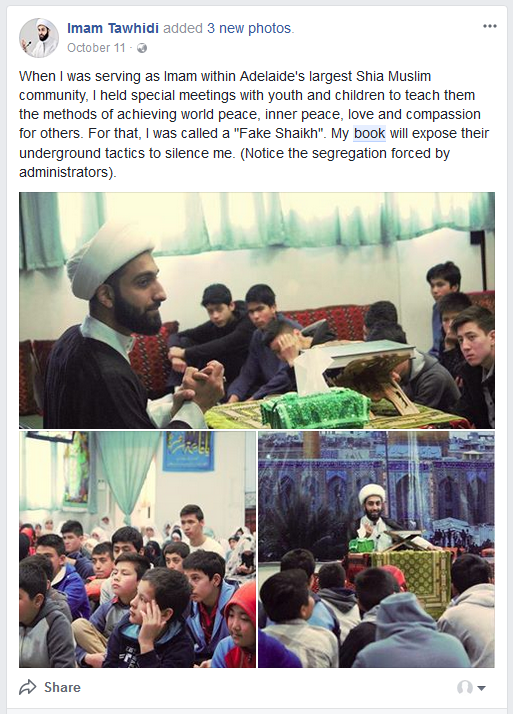 If we speak to people who actually attended these ‘lessons’ we find it had nothing to do with ‘world peace’ as he claims:

Other places he attended were open events that did not require invitation, nor was he invited – but rather showed up. These are events that were run in the heart of Melbourne Central, for example:

Please note these practices are the same type of practices that is still secretly supported by Tawhidi. See here.

Aside from this, we must emphasise that Tawhidi only visited fringe Shia centres, and no major ones, and only ones that were run by his own teacher, Sayed Sadiq Shirazi. In these centres, he only took part in rituals that he continues to secretly support.

The opposition since day one was proved in another post, where he said the following:

Thus, it is clear that Tawhidi has been opposed since 2011, so his claims of always being supported until he reformed in 2016/17 is absolutely baseless.

Tawhidi the habitual liar, continues to try and con the world – pretending that he sent a letter back in 2016 to Mayor de Blasio.

The fool forgot to use his OLD letter head.. and instead used his new one which he only created within the past month lol. Notice the letter head he used in the past. The old letter head from a REAL letter he wrote in April 2016.. while in feb 2016 we are supposed to believe he used his NEW letter head? 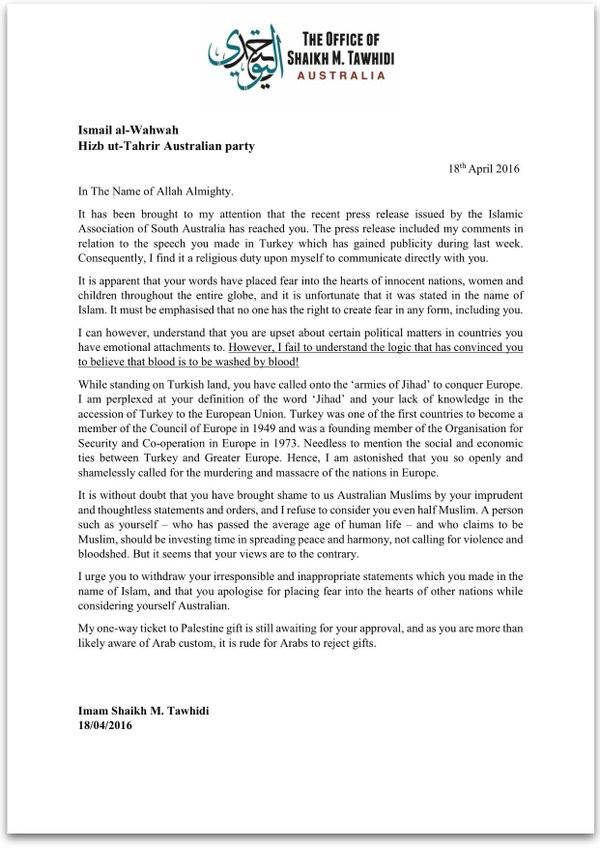 Who are you fooling Tawhidi? You never warned anyone and all this “seeking legal advice about releasing them” was just buying time to write up a letter… you are so foolish you forgot to use your old letter head.

What is even funnier, is Tawhidi being called out on the scam we already picked up ony. Eric Philips is the press secretary to the NY mayor. Look at the following tweets. 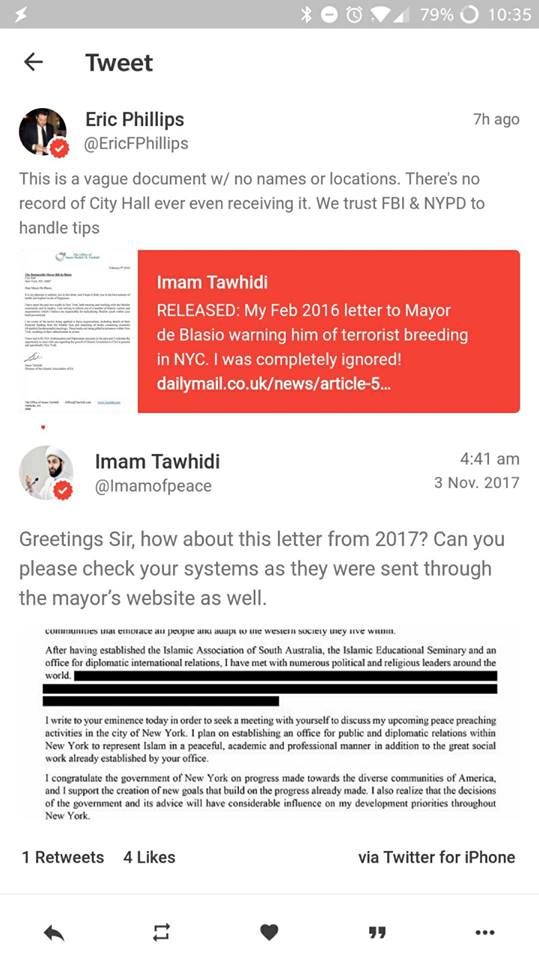 This post was to document the development of the alleged book that Tawhidi will publish. We doubt it will ever be published as he is known to make many promises, only to break or never fulfill them. He said it should be ready around Christmas time, 2017 (shown in the second image in this article).

However, if he does – and we hope he does – it will only highlight more inconsistencies and lies of his.

Keep in mind he previously (2016) stated he was releasing a book soon, but it was never released: 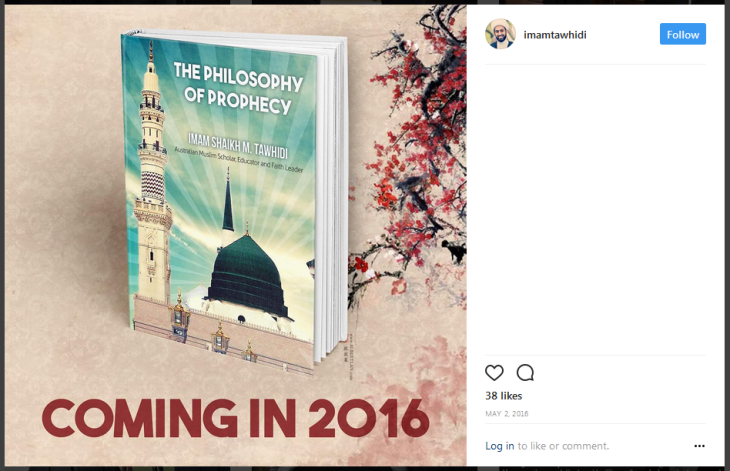 As for this new book, he first mentioned that the thought was in his mind in early 2017:

And He first mentioned writing a book on June 9, 2017 – where he promised to include many pictures. 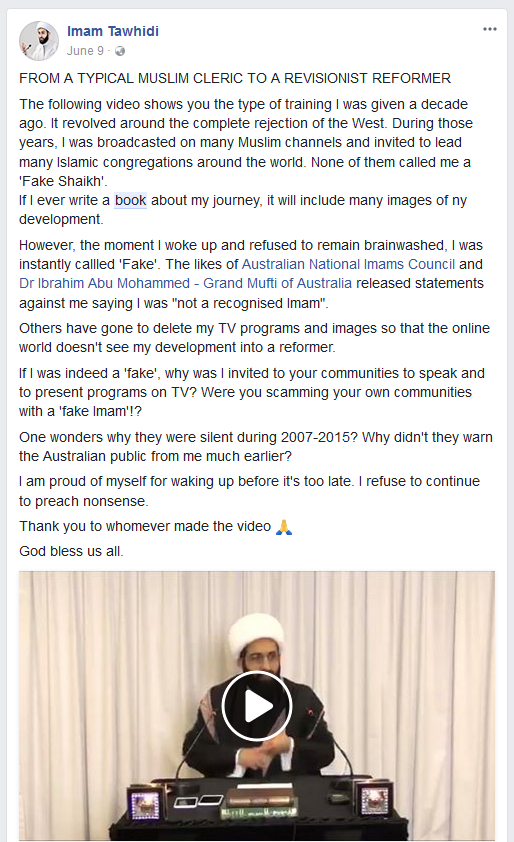 He then announced he will publish a book in some deleted posts, then made claims that his book preview of 50 pages was rejected by publishers for being too controversial. He promised not to remove any controversial passages, and that release date is around Christmas time. In typical fashion, the daily mail then made an article about this. 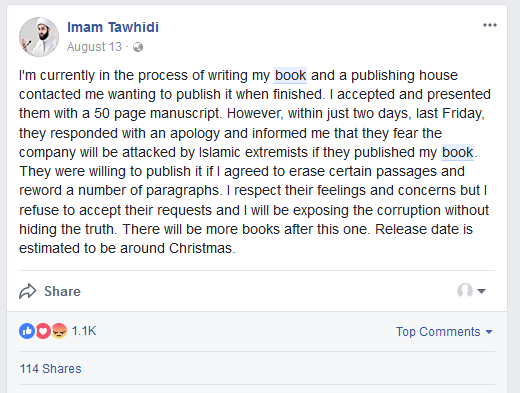 On July 30, 2017 – Tawhidi shares progress in which he is in the second chapter, and further explaining that it will have 10 chapters, with the last explaining some practical solutions to ‘reform’.

One important point to mention about this specific post, is that those who attended this particular event commented on the facebook page. The post can be found here. See screenshot below which shows what really happened, and how they feel about Tawhidi.

On October 14th, surprisingly, Tawhidi claims the book is coming along much faster than projected (remember, original release date was supposed to be Christmas 2017).

A sneak peak of his book was mentioned on the 8th of November:

Finally, on November 11th 2017, it is claimed that it is finished. An image of a USB is shown, claiming that it is all completed ready to be edited and published.

This truly highlights the hypocrisy of Tawhidi.

When it suits him, countries like Egypt are governed by Islamic Law and Sharia. If there is anything negative from that country, it is because of Islam. 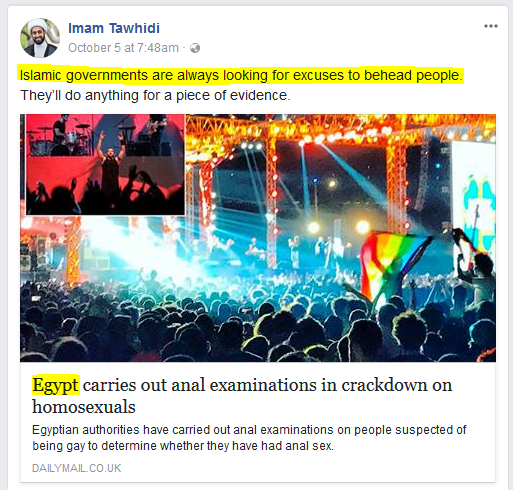 However, if there is anything good – it is just a secular country with Muslims in there.. not an Islamic country with Islamic Law or Sharia.. no no no.. don’t mix those up with Saudi Arabia and Iran………….. lol.

I feel sorry for those that fall for this mans lies.

Notice the dates on these two posts.. just one day difference lol.

Just notice how Tawhidi has no common foundational standards. Just says whatever he feels will win him the argument.

Tawhidi has made some audacious claims about his credentials.

Firstly is his religious credentials. This was exposed in the following videos and letter from Al-Mustafa University: 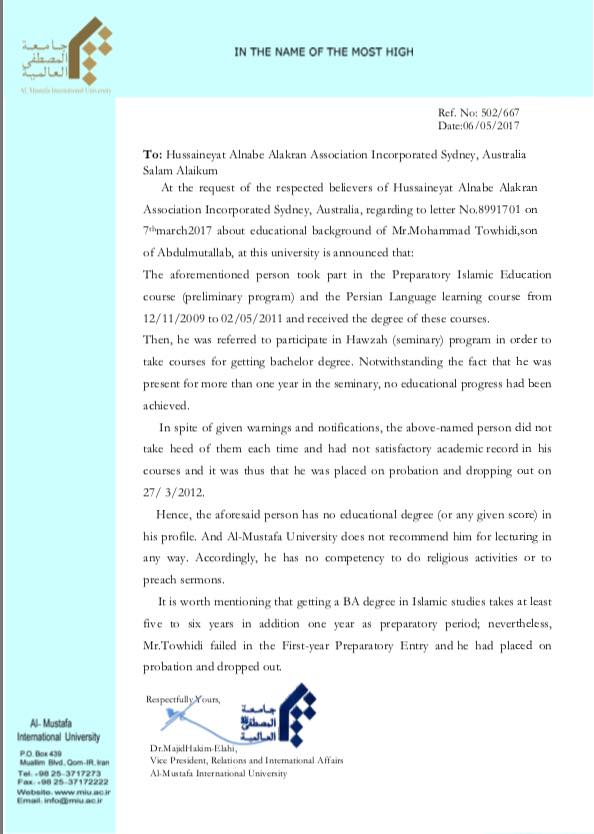 As for his other credentials which he has recently been posting about – it is even more laughable. 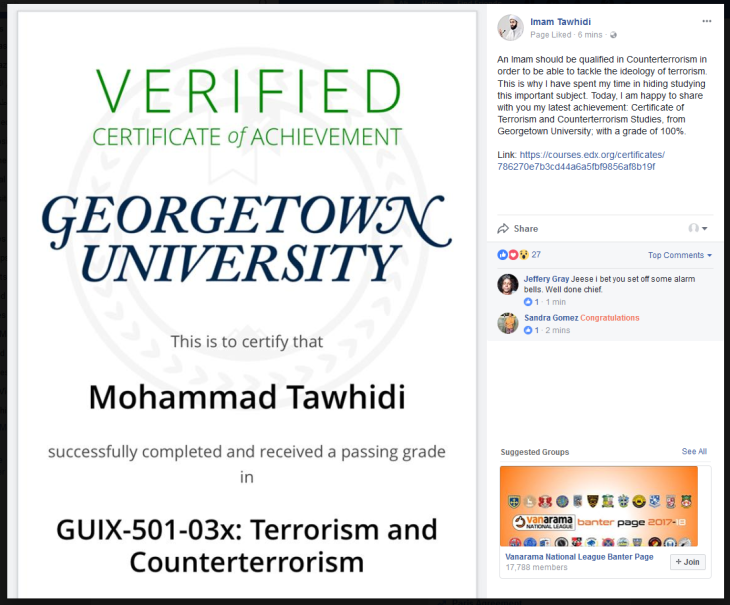 Tawhidi is so proud, boasting his latest ‘degree’ to show how qualified he is. This is a FREE course which spans a total of maximum of 70 hours of cursory studies. The only fee he paid was a US $49 fee for the certificate so he could post on his page. (see course details here).

This was highlighted by a 9 News article also:

In the next [statment, Tawhidi is] delusional – “I will say this because of my studies on counter-terrorism, I feel I’m qualified. If the United States cracks down on Iran and its regime, Iran will fund ISIS”.

The counter-terrorism studies Tawhidi is referring to is a free online overseas course with a certificate that can be purchased for $49. It took him 12 weeks to complete from home.

But press him on his qualifications and he will tell you he “studied at Harvard and Georgetown universities”.

And herein lie the roots of Tawhidi’s troubles.

One man did some more research into this:

Another ‘credential’ that Tawhidi likes to show off is the one hanging on his office wall. 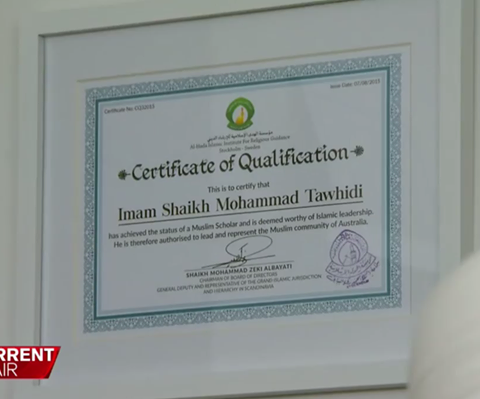 “Certificate of Qualification
This is to certify that Imam Shaikh Mohammad Tawhidi has achieved the status of a Muslim Scholar and is deemed worthy of Islamic leadership. He is therefore authorised to lead and represent the Muslim community in Australia.”

This is signed off by Shaikh Mohammad Zeki Albayati – Chairman of Board of Directors / General Deputy and Representative of the Grand Islamic Jurisdiction and Hierarchy of Scandanavia.

This was “awarded” and “sealed” by the Al-Huda Islamic Institute of Religious Guidance – Stockholm / Sweden.

This is rather fascinating. Let us discuss.

1. On what basis can a Swedish institute issue any sort of certification for someone to lead a community in Australia? When has Tawhidi visited or even studied in Sweden? Tawhidi has never even been to Europe!! It seems like simple connections and a phone call will get u a cheap certificate, eh?

2. The “Al-Huda Islamic Institute of Religious Guidance” seems extremely shady. It has no running website (see: http://www.alhuda.se/) and only an Arabic facebook page running (see: http://bit.ly/2hrGM5G).

3. Shaikh Mohammad Zeki Albayati is a representative of Sayed Sadiq Shirazi (see: http://alarabi.se/wp-content/uploads/2013/12/97.png). Sadiq Shirazi is the same person who “crowned” Tawhidi and the same man that Tawhidi continues to praise, show off his picture, and not call out despite promoting Sharia Law.

4. The “Al-Huda Islamic Institute of Religious Guidance” is, of course, a Shirazi run and funded centre. Amazingly, the centre was established to spread Shia Islam in Europe, as is the mission of the master and teacher of Tawhidi. We quote the official Shirazi website speaking about al-Huda:

“We at Al-Huda and Imam Hassan Mujtaba institutes, do our best to expand our cultural and religious programs to attract more youths to the doctrine of Shi’a Islam. I need to add that the Shirazi scholars have had a great role in spreading Shi’a Islam in the Western and European countries. The great works of the Shirazi scholars such as the distribution of many religious books and Islamic lectures have made many people to know more about Shia Islam and embrace it. I want the Lord to help the Grand Ayatollah Shirazi in his way of serving Shi’a Islam and make him more successful.” (see: http://www.english.shirazi.ir/1941)

You may now be getting the idea of what Tawhidi’s mission is in attracting people to his doctrine, no matter what it takes – even lying and making everyone else look bad.

Again, another failed mission with another mickey mouse certification. 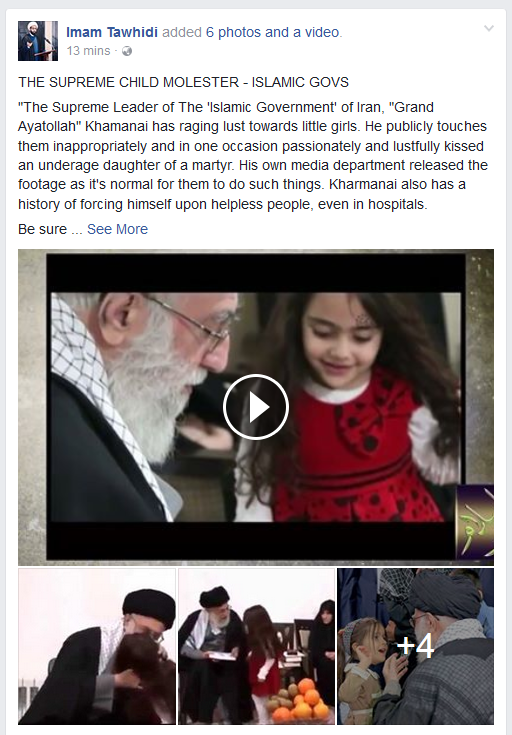 This is a serious allegation, and the basis for it was the video has a particular scene where the angle looked as if the grand ayatollah was kissing the child on the lips. This is not true. Below is an image of the angle: 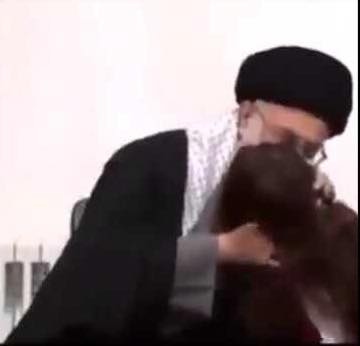 However, we can see from other angles that photographers took that this was a complete lie: 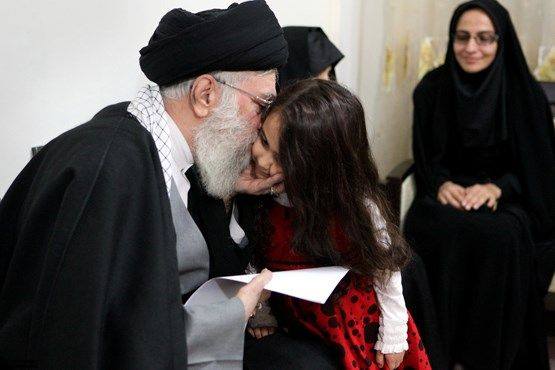 As you can see, Tawhidi has no limits. One could easily play on these images and create a story. For example, the following image with Tawhidi, we can create any story about where the hands of Tawhidi may be. However, this is dishonest and below the belt. May God save us from such behaviour.

Tawhidi has a very bad habit of misconstruing, lying, or fabricating things for his own advantage. By doing this, it only exposes his own hypocrisy.

Notice the following posts he made. The first image shows him attacking the Iranian Government for “sexually abusing a female” and somehow concluding they stole and drank the alcohol being smuggled in. 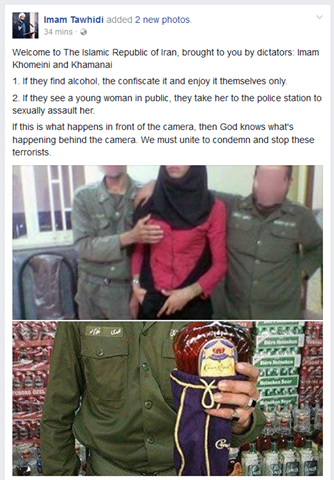 Note in the above image, his followers can sniff something suspicious. See the following image, how it shows in reality this was not even a female. It was a man dressed as a female. 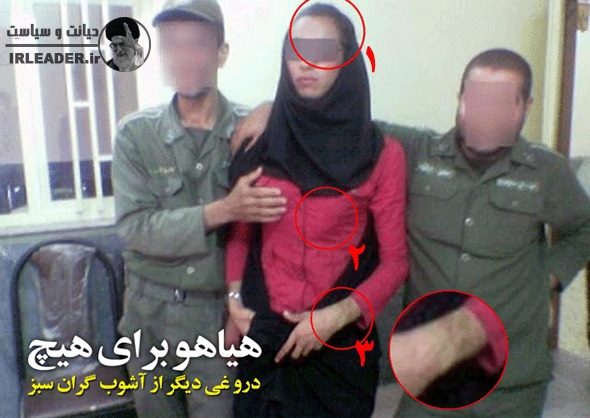 The grand irony is the very next day as can be seen in the next image, Tawhidi posts about ISIS men dressing as women and celebrates how they were exposed. 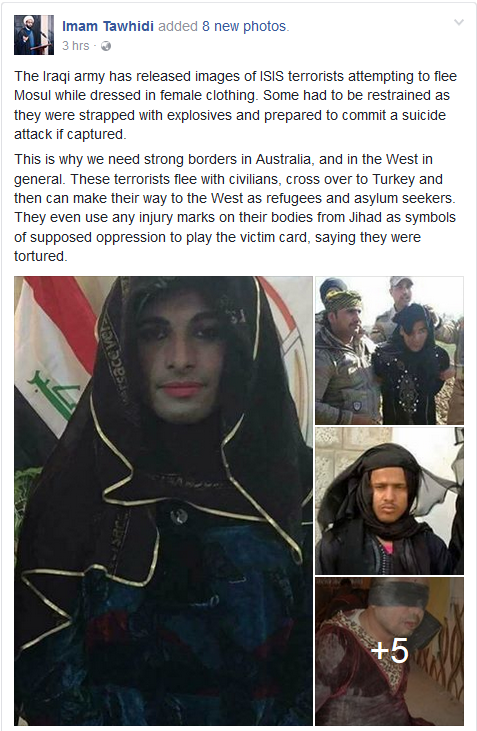 For those who have a little bit of intellect, you can see how his hatred for Iran will allow him to fabricate anything he likes for the sake of his agenda. He will use ambiguous and unverified reports as truth, and reject truth as “fake news”.

We will let the images speak for itself. One is a tweet from Tawhidi. The other is from the book Tawhidi was gifting to people. The book of his teacher, mentor, idol, and guide – Sayed Sadiq Shirazi. Tawhidi only praises and promotes Sayed Shirazi and has never spoken ill of him, while (by the standards of Tawhidi) is the biggest extremist threat to the West. 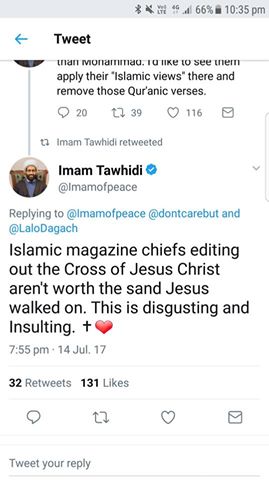 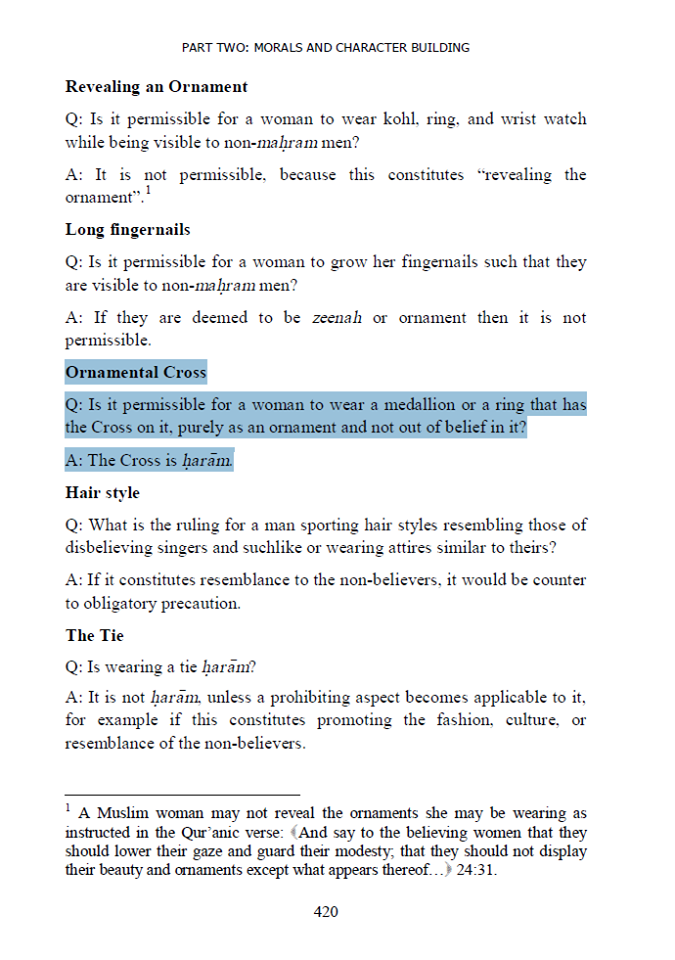